today I’ve got another in my “jobs I’ve had series” and this one is about being a courtesy clerk at Safeway, my first real job. wait, I know what you are thinking – “Luke, your first job was as a poppy-seed salesboy.” okay, you got me. so this is my first job for an employer who wasn’t a family member. it was the first time I had to shave, put on a uniform, and clock in. it was the first time I had got an assigned schedule that dictated when I’d have free time and when I’d have to work. It was the first time that I served the general public. I could go on. there were a lot of “firsts” at this job.

the store I worked at was in West Bremerton. It was an interesting crossroads between some of the more rural parts of the county and the city. and we had an interesting cross section of customers. black, white, native, asian, latino – the rich, the poor, the middle class – it was just as common to serve someone with food stamps as it was someone with an American Express card. actually the former may have been a bit more common. we had lifetime Kitsap residents and new families brought in by the Navy. occasionally we’d have foreign tourists on their way to the Olympic National Park… but that was rare.

one of the things I’ve always admired about my home town, and the county of Kitsap is how diverse it is – and the Callow Safeway was a fantastic microcosm of that diversity.

one of the most important parts of my job was to provide “superior service.” now I know this sounds like some sort of corporate bull-speak, but it was actually something that Safeway took seriously. we had secret shoppers, we had scores, we wanted to do well as a collective group. well, at least some of us did. me being me, I didn’t see any other option that to be the best darn courtesy clerk I could.

when I started the job I was not as outgoing and friendly as my managers would have liked. I’ve always been a little introverted (hence the writing, editing, living alone, etc). it’s not that I don’t like people – just sometimes I’d rather be by myself. well, when you’re job is to provide superior service to every customer, you have to get over that. so I challenged myself to start every shift by walking the floor. I’d gird my loins for the day’s shift by actively looking for people to talk to. I’d go up and down the aisle trying to find anyone who looked like they were looking for something – then help them. eventually this stopped being something I was nervous about, and began to be something I’d look forward to. it was the ritual I’d start the day with.

after completing that round I’d go and bag groceries. I loved the puzzle aspect to it. it was like a game of Tetris played with a constantly evolving set of pieces. how do you protect the tomatoes from the cans of chili? how do you use the cereal boxes to build a fort? how do you keep the ice cream from melting? even loading cars could be a game. my favorite times were when the customer would apologize for their full car – it made finding spots for their bags a challenge! 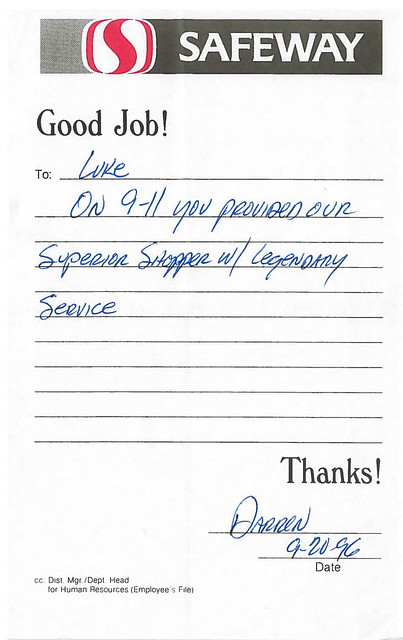 in addition to bagging and carrying out, I also did a LOT of cleaning. in my downtime I’d clean the unused check stands or sweep the floors. I’d clean up spills and accidents. broken spaghetti sauce was the most common, and also a pain to clean. PRO-TIP, you use two pieces of cardboard to pick up the glass and most of chunky sauce, then mop to get remaining more liquid parts. I’d also clean bathrooms. man, the number of times I’ve cleaned public toilets, I couldn’t even tell you. sometimes they weren’t bad… others…. oye. the most consistently messy bathroom was the ski patrol’s at Kirkwood – but that’s a story for another day. if business was really slow, I’d go outside and sweep the parking lot. I even had some shifts where I cleaned the bakery and the meat department. and yes, cleaning the meat department was as gross as it sounds. 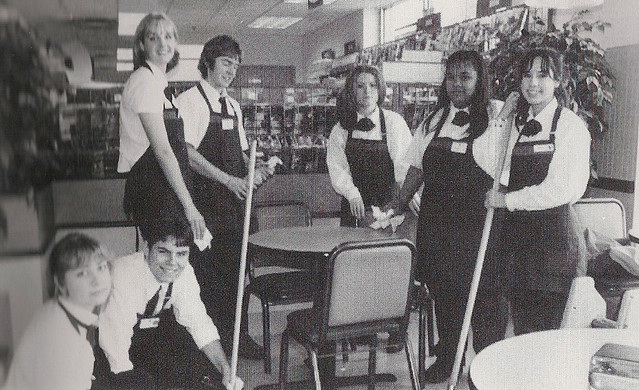 probably the most interesting shift I had at Safeway came when I was a senior in high school. or rather, when I was a sophomore at college. heh. that’s a little confusing, but thanks to the Running Start program, I was in my second year of college when I was a high school senior. because I set my own class schedule, I made it so I only went to school two days a week – Monday and Wednesday. I did this so that I could spend Thursday, Friday, and Saturday snowboarding. I would sleep in my car up at the Stevens Pass Ski Area Thursday and Friday nights, then Saturday I would drive home. Sundays I’d be home, go to church, and finish up whatever homework I didn’t get done at the mountain.

this plan left only Tuesday for work. and I needed to work eight hours in order to pay for the gas and food my weekend snowboarding adventures required. but the only eight hour courtesy clerk shift was the morning cleaning shift… and that started at 4am.

working that shift was the only way my plan would succeed, so I convinced my manager to give it to me. I’d wake up at 3am, take a shower, make some tea, eat cereal and be out the door by 3:40am.

the day began with sweeping the entire store with one of those dust-mop bush broom things. this was a little hard because the night crew still had boxes and junk everywhere. after that I’d get the floor cleaning machine. it was a big larger than a shopping cart and drove like a tank. literally. it had two levers, push them both forward to go forward. pull them both back and go backwards. push one and pull the other to do an on-axis turn. it was pretty fun to use and looked something like this. after making my way around the store I’d go back and look for any “trouble” spots. if there was something sticky on the floor the machine missed, I had a mop with brillo pad attached that I could scrub away with. occasionally there would be something, like gum, that even that couldn’t handle. in which case we had a putty knife to scrap away at the floor.

with the floor taken care of it was time for trash cans. the large ones for the public, the small ones for the checkers, and the break room. then it I headed outside, rain or shine, and swept the parking lot before it filled with cars. I walked the perimeter of the store and got any trash there as well. then it was back inside where I cleaned the employee and the public bathrooms.

by this time it was 8am and store was starting to get busy, so I stopped cleaning and began to bag groceries. at 10am I took my lunch break. this consisted of eating in 15 minutes, then going to my car and taking a 30 minute nap. when I woke up at 11am it felt like a whole new day… and I only had two hours of work left. they’d go by in a flash, then I’d head home and do homework.

it was definitely an odd shift to have, but it was exactly what I needed to do at the time. I learned a lot in my time working at Safeway. how to be friendly, how to anticipate needs, how to find things to do when it was slow. the job gave me the income to pursue my hobbies of snowboarding and skateboarding. it helped me buy my first car – which in turn funded my first editing system. it was a great job and I always look fondly back at my time working down there on Callow Ave.

here’s a photo my Dad took of me working, if you look close, you can see that I have a goggle-tan=) 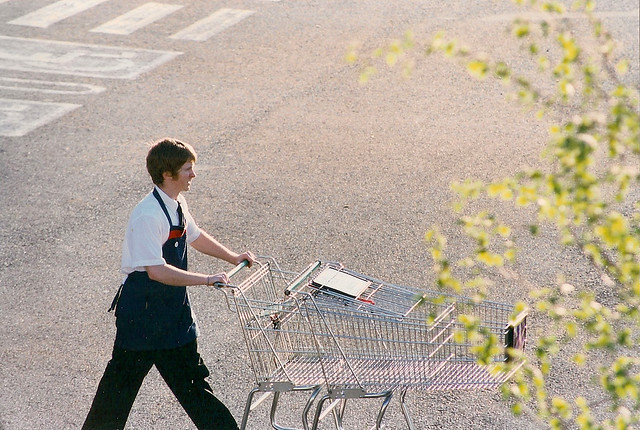