it’s been a while since my last edition of “Jobs I have had”. in the last one I talked about my repeating summer job of serving ice cream at the Folklife/Bumbershoot Festivals in Seattle. I continued working at Safeway up until nearly the time when I left for college… I was headed to Sonora, California to attend Columbia College.

technically I lived in Columbia, since I was in student housing at the college… but that town is so small it’s hardly worth mentioning. I mean, Sonora itself was only 4,000 people and it was the county seat! being that it was my first time away from home, and first semester at college I wasn’t in a big hurry to get a job, and I was fortunate enough to have my living and school expenses covered by financial aid and my parents, so I didn’t need to work… unless I wanted to do fun stuff like see a movie, or buy new things for my computer, or go snowboard… then I’d need to make some money.

the first job I had was rather short lived and I don’t completely remember how I got it. there was a family that lived nearby that one of my aunt’s knew… I think from Angels Camp? but really I’m not sure. at any rate, this family had a fair amount of property, and lots of grounds keeping type work that they hired people to do. they had a father & son who worked for them (let’s call them Bob, Sr. and Bobby), but it was easy enough to plug me in for some more work.

my first task was digging ditches. seriously. we had to dig a three foot deep, two foot wide, forty foot long ditch. now, “digging ditches” has always had a sort of mythical type status, in the sense that it was the worst type of physical labor. I mean, take the film “Cool Hand Luke”, where the evil Warden has Luke dig a ditch, then fill it in and dig a new ditch, then repeat. if you don’t know the film… watch the scene below.

digging ditches is freaking hard, back breaking labor. at 19 years of age, I was nice and spry—but the hard, clay rich ground did a number on me. I remember coming home from digging and my hands just ached. from holding the pick and shovels! I didn’t even know that was possible.

talk about a good motivator for being successful in school… I was darn well going to do whatever I had to in order to avoid that kind of work. after digging the ditch I got my first paid “film work” ever. the family lived at in intersection where logging trucks would merge from one hi-way to another. as they slowed they used their jake brakes. these are exhaust driven breaks that help the trucks slow, and in the process make a LOT of noise. apparently it wasn’t legal for the trucks to be using them here, so I spent the day filming license plates and trucks. not sure if they ever did anything with the tape… but it felt nice to get paid for something other than my lower back strength.

the only other thing that stood out in the brief time I worked was an incident that happened mid ditch dig. the Bob, Sr. was backing up his work truck, while Bobby and I took a water break… and the guy backed INTO a old stone well, breaking it. maybe it was a fountain? it was round, and built with rocks and mortar. anyhoo–it was old and Bob, Sr. busted it up with his truck. the Home Owner was there and saw it happen. he was a bit upset, because the Bob, Sr. was just being careless. there was lots of room to back up that WASN’T the well. it was like he ran into the ONE car in an empty parking lot…

Bob, Sr. got of his truck and then proceeded to try and blame ME for the accident. which was ridiculous… he hadn’t asked me to guide him in or anything… and I wasn’t the one driving! the fact that an adult would try and blame a kid for his mistake, which was CLEARLY his mistake was dumbfounding. like, how poor was that guy’s character that would be his first instinct? the Home Owner didn’t buy it, so I didn’t have to defend myself—-but it soured me to working with them further. I was pretty certain that I didn’t want to have anything to do with a man like Bob, Sr, whose character was so lacking. and the snide part of me thought “this is why you are digging ditches as a grown man.” that thought wasn’t too charitable… but I remember thinking it. at 19 years old I had a lot to learn about grace. (something I’m still working on…)

luckily I didn’t have to work for them too long, shortly after I got a job at the clothing store Mervyn’s. according to Wikipedia, this was a “mid level” department store that went out of business in 2008… it was nice enough place. I remember shopping there in junior high… before I got into skate clothes and thrift store hunting, that is. well, I was able to get a job as an “associate” there, which didn’t really mean anything in particular. I was trained to run the register, put out clothes, and do general retail type things. I have to say, I was pretty bad at folding clothes. still to this day, I’m not good at it… but back then I was VERY bad. I remember some of the girls were really good at it… and being a little mystified by how they did it.

it’s funny looking back at having this job, because the store was located pretty far away from the college, and I didn’t have a car. I’m not really sure how I got to and from work. probably a mixture of asking friends for rides, crashing with the Turner brothers in town, and taking the bus… which didn’t run too often, but enough to help out. I do remember that it didn’t go all the way to the shopping center, so I had to do a bit of walking from downtown Sonora out to the shopping center.

now, there was a big hill that was in between the two, and it didn’t have a sidewalk and people drove FAST up it. this really wasn’t the sort of place I wanted to walk. like, ever. luckily, there was a way around it. just to the south of the hill, an old train line cut into town and then passed near the shopping complex where Melvyn’s was located. if I walked along the tracks, it would put me right where I needed to go. it wasn’t the most well lit way to travel. i.e. not lit at all, but as a scruffy young man, I wasn’t too concerned. plus I had a headlamp for the trips back.

walking along a set of train tracks through the woods is such a cool feeling. it’s a moment steeped in Americana. even though I was going to a lame job at a big retailer, when I walked along those tracks I had a feeling of openness. a feeling that anything was possible and that I was free. maybe I’m just a romantic. or maybe there’s something in our American DNA that responds to that moment. trains helped us conquer the vast distances of our continent. they symbolized the West and a trip there meant a trip to new beginnings. so being on train tracks, even on when just on foot, taps into that feeling of exploration… at least in a small way. heh. well, that’s one thought.

I think this photo, which I found randomly on Flickr was taken near where I walked… 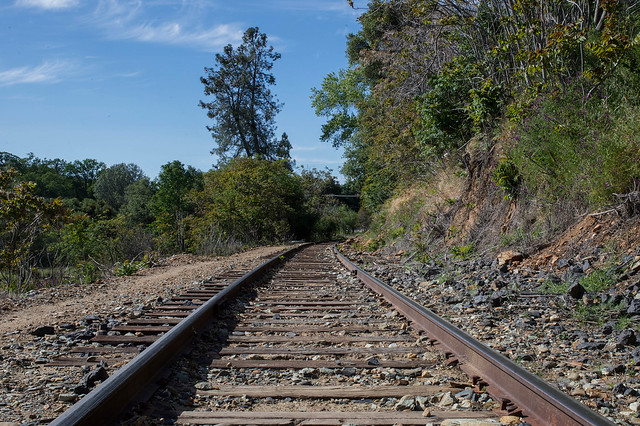 this job didn’t last too long either. soon winter was approaching, and with winter would came snow… and that meant the local ski area, Dodge Ridge was in need of workers. my best friend at Columbia College, Ryan, worked at the mountain and suggested I get a job there too. I had no allegiance to the boring world of retail, and the idea of a free season pass + ride breaks sounded pretty awesome. so I gave my two weeks notice and bid the world of clothes folding adieu.

working at Dodge Ridge would be one of my favorite all time jobs and in the process I’d form a friendship with Ryan and his family that would last to this day. but that story will have to wait until next time.