lessons from a failed webseries

12 May lessons from a failed webseries

today I’d like to chat with you about “The Pitch Room.” this is a web series that me and my good friend, Troy came up with just over a year ago. this blog is going to talk about the process of developing the idea, the challenges we faced, and what the end result was.

the idea
after Troy moved back from New York, he and I started getting together for morning coffees. we are both morning people, we both love coffee, and since we live in the same neighborhood it was easy to do. it gave us a chance to catch up, people watch, and brain storm ideas for potential new projects.

we wanted to make something that we could write together, Troy could act in, and I could direct. a web series seemed like a good idea. after a few weeks of bantering around ideas, we stumbled upon the question “who’s responsible for really bad commercials?” and what would their meetings be like? because they can’t be setting out to make “bad” and “offensive” ads… they must really think they are doing good work. this seemed like an idea that was rife for comedy. we could show a bunch of well meaning knuckleheads making bad decisions. all we’d need is a cast and a conference room.

Troy already had a commercial in mind, so using that we wrote a pilot episode. then we sent it over to my friend Ryan Mickels. he and I had met at comic con the year before and had talked about working together. this seemed like a good first project. Ryan liked the script and was on board to be our producer. but before we moved forward he had a note, “should we pick a more well know ad?”

this was a great point. our ad was funny, but you’d be hard pressed to find someone that knew it. we started thinking about more infamous commercials, but nothing moved to the forefront. then one day it hit me… the Superbowl was only a month away. and the Superbowl is like, the Superbowl of Ads. some people watch the game JUST to see the spots. it’s a time when agencies swing for the fences. sometimes they hit a homerun, sometimes the bat flies out of their hands and hits a small child in the head. we were hoping for the later. figuratively speaking, of course.

so we put the brakes on and waited. as soon as the game was over, I knew what commercial I wanted to lampoon. that next week in Mammoth I took our original pilot script and rewrote to match the new commercial.

the production
a reoccurring theme in this blog is the idea of better-faster-cheaper, and once again we ran into that wall. even though I wrote the script the week after the Super Bowl it would be almost 2 months before we could get the location, crew, and actors together.

we had almost no money for this project which makes things tough when it comes to little things like “location” and “crew” but luckily I had a bunch of friends who stepped up and helped out. my good friend Jeff hooked us up with the location, Angel came out and was our assistant director, Clovis lent us some of his art, Brian who I haven’t worked with since film school handled the production design/set dressing/props, and my buddy Jason handled the cinematography and lighting. (side bar: Jason and I used to skateboard together, and videoing him is some of the first “filmmaking” I ever did.”)

the crew was small, but everyone was skilled at their job and we sailed through production. it really helped that we had a rehearsal a couple days before and the cast was nailing it. 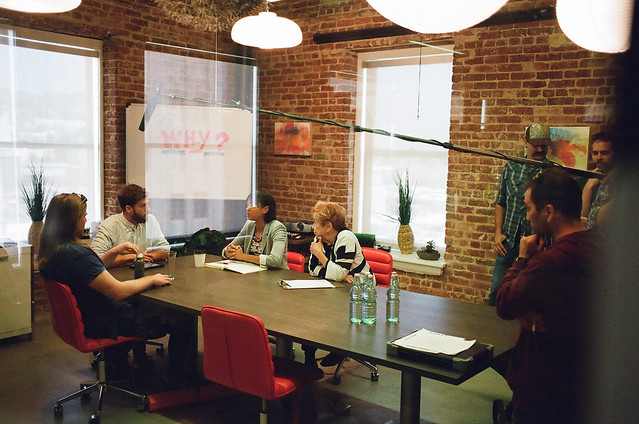 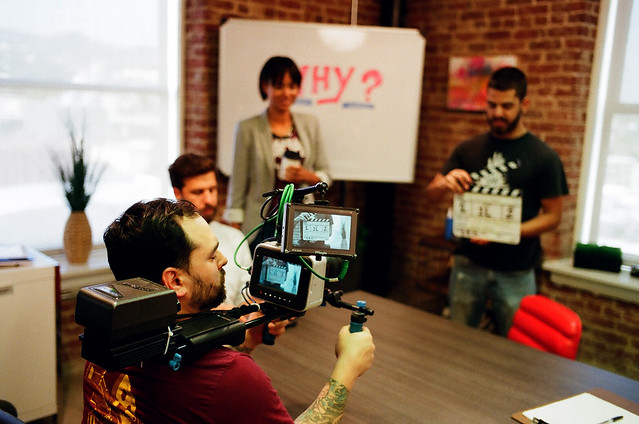 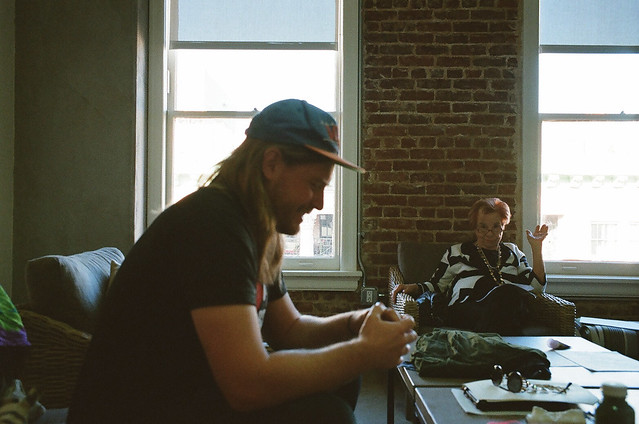 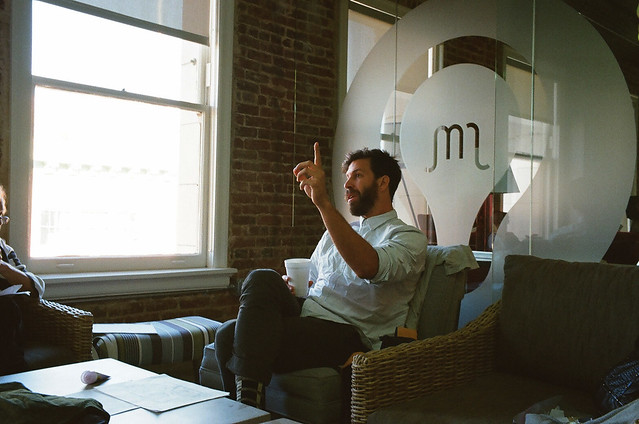 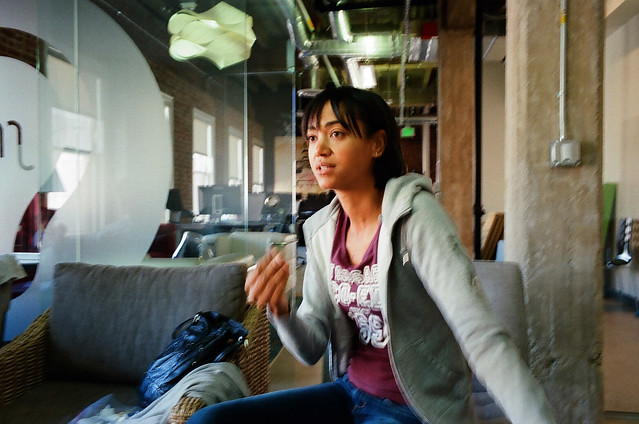 the rollout
editing went fairly smoothly. I hired Guy, my assistant editor on LBTXIV to prep the project for me and then got into it. it was tough juggling THE PITCH ROOM, TIME TO EAT, and LBTXIV… those few weeks (or months?) were a bit of a blur. after a couple passes, Ryan, Troy and I had a cut we were happy with. I started working with McKenzie to score the piece.

because we’d already missed our “get done right after the Superbowl” window, we didn’t feel the need to rush the post. this was both good and bad. we had the time to make the project just what we wanted, but we also didn’t have the “deadline to meet, building on fire” sort of motivation to get things done quickly. for such a short piece it took longer to finish then I would have liked… but at the same time, we didn’t have a plan to put it out yet, so it didn’t really matter.

what does one do with a web series pilot?

that’s a darn good question and one that we definitely struggled with answering. from the onset of this project, people responded really positively to the idea. when I asked people “Have you ever seen a commercial so bad or offensive you wondered ‘who are the idiots that came up with this?’” they always said yes. we know these commercials. we know that head-shaking feeling wondering how they could been made. and people liked the idea of seeing this happen.

but despite the universality of that feeling, THE PITCH ROOM struggled to find a home. I’m honestly not sure why, but I have a few theories.

1) we were late on releasing it
-I think to be successful in a parody/satire environment, you need to release the content within a week. ideally with in a day or two. it’s got to catch that wave of social media posting in order to reach a broad audience

2) we were parodying copy written material
-distributors, producers, and even SAG was confused about our project being a parody. could we show the ads? mention the brands? talk about the spots? was this asking for legal trouble? it really wasn’t. parody is a well protected part of US Copyright law, but that doesn’t really matter. the very premise of the project caused people to pause… and that made it harder for them to pass up the chain for support.

3) it didn’t support a brand
-in the current webseries climate, “brand” videos make up a big portion of what gets funded. these might actually feature the brand OR they might just promote a lifestyle that the brand wants to identify with. here we were though, actively attacking consumerism and ad culture. we were biting the hand that might have potentially fed us.

4) it wasn’t that funny
-man. this is the toughest one for me, because as the writer and director it’s really on me. while I may love the hidden Superbowl joke (“a great opportunity we don’t want to pass on”) and the puns regarding the Game and League of Legends, funny enough. the project required the audience to know the commercial, and then analyze it in reverse. the humor was lampooning, but LOL’ing… and with problems 1, 2, and 3 already in place it was a hurdle too big to overcome.

after spending a few month sending the project out we realized that we weren’t going to have anyone pick it up. the next question was do we move forward on our own? after all, it was a relatively easy project to make. Ryan worked up a budget and then the three of us met to discus. over delicious grilled meats and beer (seriously Spitz is amazing) we decided that the project wasn’t worth pursuing further.

our goal was to develop a project that someone else would fund… and making another 4 episodes of THE PITCH ROOM didn’t seem like that would get us closer to that goal. it already had proven to be a concept that wasn’t right for the market. we decided that it would be better to use our time and resources to develop and produce new projects. to make a sports analogy, why keep bowling on the lane were the pins are gone, when you could move to the next lane over and have a fresh frame to try for a strike? heh. so maybe bowling isn’t the best sport for analogies… but I think you get the idea. 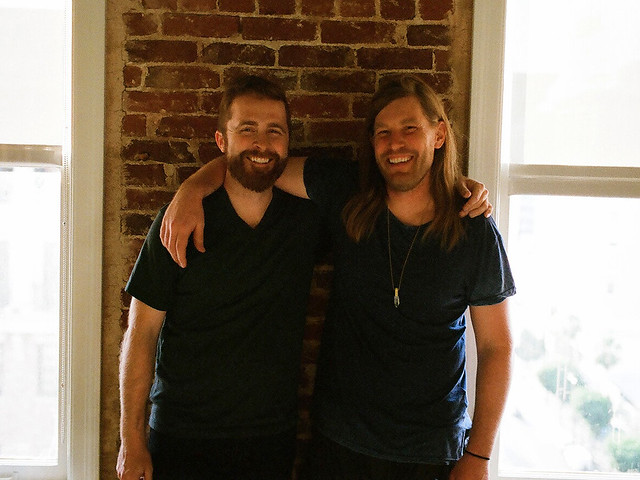 at the end of day, I’m still happy with the decision to make THE PITCH ROOM. I got to make a fun project with some of my favorite people. some of whom it was a first time (Ryan, Jason, and McKenzie) and others it was a return to a long history of collaboration (Angel, Brian, and Troy). I’m looking forward to the next time we’ll get to team up… and for the next one, we’ll make sure to have a bit more of a plan before we start.

and by plan I mean:

1) if it’s a current events/topical piece – the distribution needs to be set up
-that means everyone in post needs to be available and have deadlines to finish.

2) it needs to be original material
-parody is fine, but should be less subtle. e.g. someone at SAG should not get confused by it.

3) it doesn’t need to support a brand… but if a brand can pay for it, all the better.
-we need to develop projects that people want. less “throw it against the wall and see what sticks” more “this is what people want to make, so let’s work on something like that.”

4) this one I’m not going to change.
-because dang it, I am who I am. and if I’m not making things that I enjoy making – then what is the point?

NOW, for a special treat, here’s a special, extended, director’s cut scene with thirty five new jokes! actually I don’t know how many new jokes are in there… but give it watch now!

and you out there, what have you learned from projects that didn’t turn out how you hoped?