Skeletons on the Zahara

09 Nov Skeletons on the Zahara

today I want to talk a bit about a book I just finished reading. it is “Skeletons on the Zahara: A True Story of Survival.” it chronicles the trials faced by the crew of an American trading vessel that crashed on the coast of Africa in 1815. 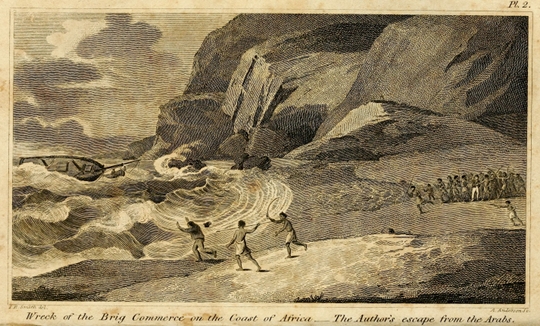 the men, led by Captain James Riley suffered a tremendous ordeal. they were beaten, starved, and forced into slavery. many of the crew never managed to make it out of Africa. whether they lived long lives as freed bedouins or died as slaves is unknown – but do to the treatment that Riley and the surviving crew members endured it seems unlikely that they lived more than a few months.

after finishing the book a couple of things really stood out to me. one, Riley even as a slave was still able to provide leadership and was personally responsible for saving 3 others crew members. he did this by first learning to communicate with and befriending his captors. and then using this new relationship to bet his life on the lie that he “had a friend in Swearah.” Riley told his owners that he knew someone in that coastal city of Morocco who would ransom him and any member of his crew.

this was not true. Riley HOPED there was a friendly American or British official there…and he hoped the long standing policy of ransoming ship wrecked sailors, no matter their nationality would hold. (keep in mind, the War of 1812 had recently ended) but he did not know any of this for certain. and he risked this knowing full well that if he was mistaken he would be killed immediately and his friends sold to the highest bidder. in a dire situation with few options, Riley picked a path and went for broke. there was no room for wavering of indecision. in order to save himself and his men Riley had to commit to a goal. not only did he survive and save some of his men, but his story became an inspiration to many…including Abraham Lincoln.

the second thing that surprised me was how normal slavery was 200 years ago. whites enslaved blacks. blacks enslaved blacks. arabs enslaved whites, blacks, other arabs… it was a fact of life in the early 1800’s. today we look back and think “how could we have been so blind?” in hindsight it seems painfully obvious that it’s wrong to deny people certain rights of freedom and to sell another person for money.

but that makes me think…”what are we blind about today?” it makes me wonder what our descendants in 200 years will think about us and what is “normal” today. will it be the way we treat animals? or take care of the environment? or how we use technology? will the way we raise children? or will it be how we treat the elderly? if past history is any example, something we do today will later be seen as barbaric and inhumane…but what? and how to do begin to work to fix it?

I really have no idea. but I’m fairly certain humanity still has a long way to go.