Posted at 15:31h in Uncategorized by Luke 2 Comments
0 Likes

a sad post today. a few weeks ago, our beloved neighborhood cat, Johnny passed away. he’d been struggling with a thyroid condition for the last year and it just proved to be too much. technically, he was my neighbor Styles’ cat… but in practice he was our entire apartment complex’s cat. so many of my neighbors had stories about how he would come visit them. if you left your door open… there’s was a good chance he’d wander in, flop down in front of you, and wait for the belly rubs.

or if he saw you outside… he’d roll over for some snuggles too. 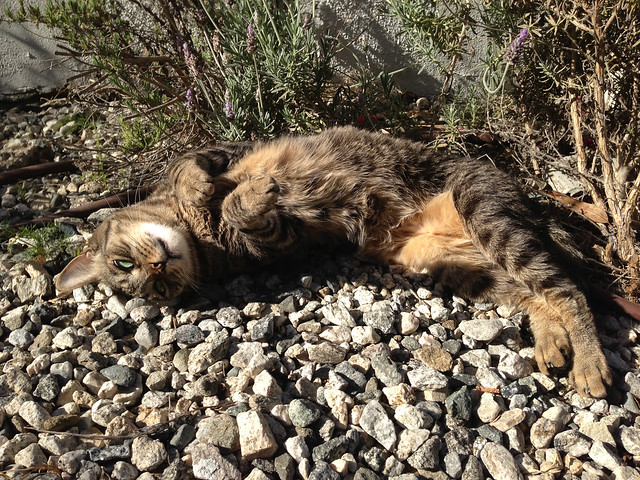 Johnny was one of the sweetest, friendliest, and most loving animals I’ve ever had the pleasure of knowing. I want to share a few of my favorite memories about him with you.

I first met Johnny in the summer of 2005. he was just a kitten and would run around the complex. dashing up the trees and yucca. occasionally he’d find his way on to our room. most of the time, he’d manage to get off, but there was this day where he just couldn’t seem to figure it out. he looked so cute and pathetic stuck up there, I had to take a picture. 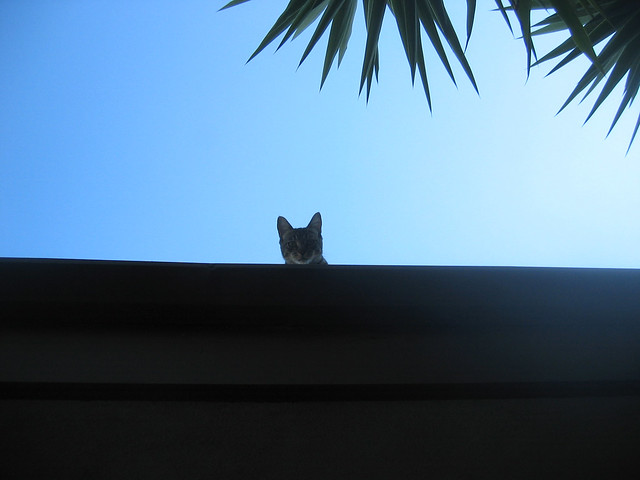 I tried to coax him down, but while a dog probably would have jumped into my arms… a cat, not so much. now at the time, there was the remnants of a staircase on the side of the building. and by this I mean just the runners, no steps. you could put your legs on either side and shimmy up to the roof. it got pretty high at the top, it was two stories to the carport below. but for some reason, I thought it would be a good idea to try and get Johnny this way. well, I guess really I wasn’t thinking. I just wanted to help the kitty. so I kept talking to him and led him over to the side of the building, shimmied on up and then was at the top. but you kind of needed your hands to climb up… how was I supposed to carry a cat down? again, I didn’t really think, just acted. keeping my balance, I reached across with my left hand, grabbed him by the scruff and tucked him into the crook of my right arm. he struggled a bit, but I was able to get him wrapped up pretty good. then I got my left hand back on the railing and made my way backwards, with one hand and a cat, down a staircase without steps.

in hindsight, not the smartest move. but from that day on, Johnny and I were special buddies.

he’d often join me as I worked from home. I’d hear him meowing outside my door, or plucking the metal gate with his claws. usually he’d hop up on the desk, wander around a bit, then take a nap on my bed. if a cupboard or the closet was open he’d go exploring. I’ve never seen a cat more interested in pots & pans then him. haha. 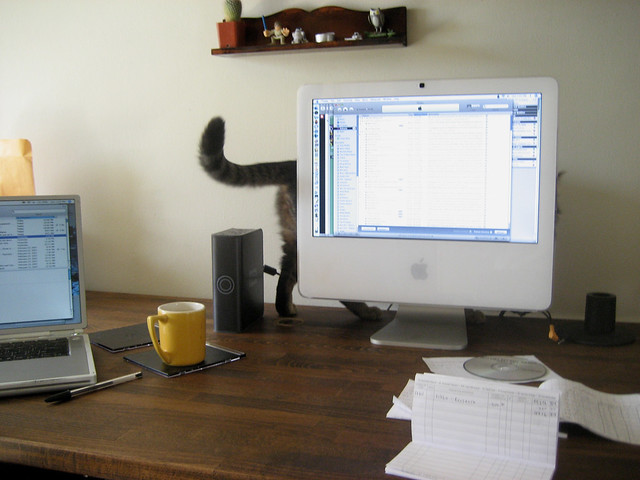 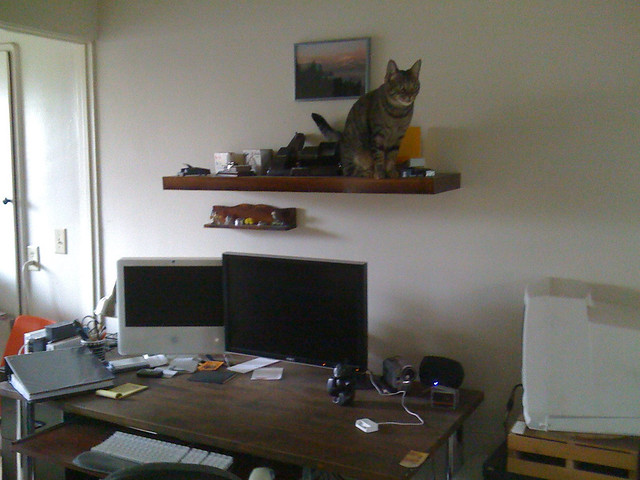 there were several years that I had a really consistent work schedule. and after a year or so, I realized that Johnny had figured out my schedule. or maybe he recognized the rumble of my car’s engine? I’m not sure. either way, when I would get home, he’d run over to my door. like, almost every day. it was really something. now, before you get thinking he was the world’s smartest cat–he also never really understood how doors worked. he’d park his little nose RIGHT against the door, so that I had to open it super slow as he then backed up. he was just so excited to get inside, it’s like the door was just an inconvenience. once inside he’d flop down on the floor and await for his belly to be rubbed. he’d do this silly thing where you’d sit down to pet him, and then he’d roll AWAY from you. and you’d have to move a bit to keep petting him. then he’d roll again. it wasn’t that he didn’t want the attention… if you stopped he’d look at you like “what’s up, dude? why you no pet me?” hehe I guess that was just part of what made him unique. 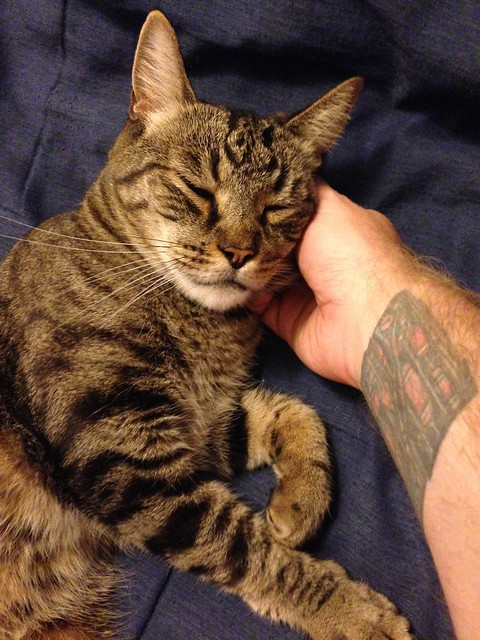 Johnny was the ultimate lover. he never was a mouser. he didn’t really like to play with toys or chase strings. what he like was people. he was happy to hang out with whoever came around and was never scared of new folks. it didn’t take him long to charm every woman I dated. even that one monster who didn’t like cats. just kidding. I don’t think I could date someone that didn’t love cats. Johnny would even cruise over and hang out at BBQs. 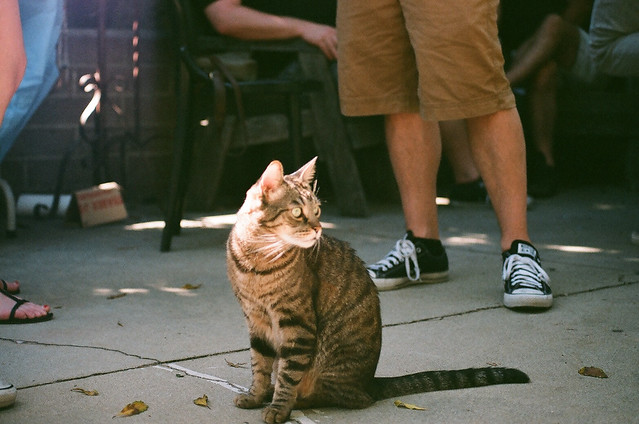 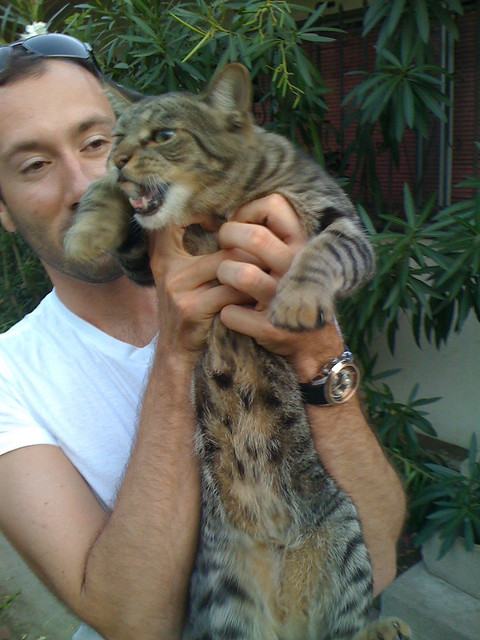 like most cats, Johnny loved keyboards. especially when you were trying to work. there’s more than a few instant messages and text documents from me that that have something like “adflksngdjgfggggggggggggggggllllllllll” written in them. heh. I remember this one time, he’s sat down on my laptop while I was trying to get some work done. it was cute. for a minute. but I had stuff to do. so I went to pick him up and that little rascal, he shot out his claws to hold on… to my laptop. and his claws went under several keys and as I lifted him, he POPPED the keys off. what keys were they? I kid you not… he pulled off the “F” and the “U”. it was a pain the “@” “S” “$” to get those back on. but how could you stay mad at a sweet cat that just wanted to hang out with you? 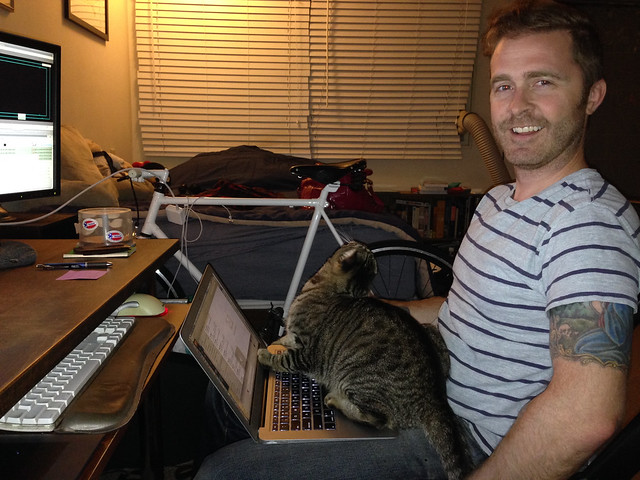 my work schedule would change and there were times that I didn’t see him as much. but still, when my door was open he’d often come for a visit. as a kitten, he’d usually just visit for 10 or 15 minutes, then be on his way. but as he got older, he started to enjoy hanging out for longer periods of time. he’d ever curl up and take a nap with me. growing up, our cat Oliver would do this… so there’s a lot of found memories for me regarding cat-napping with a cat. 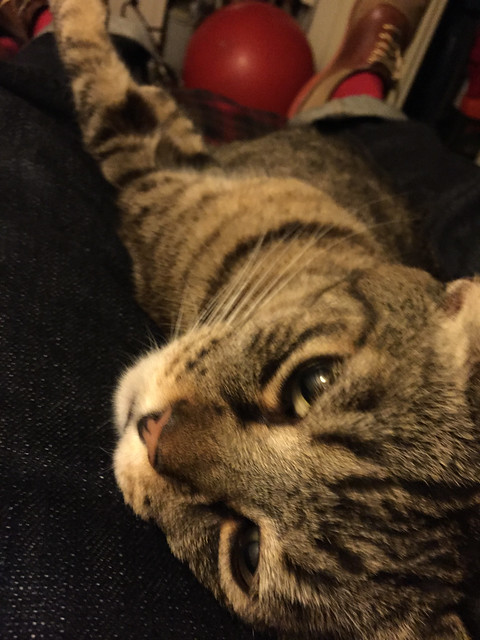 I can almost hear him purring and feel his claws kneading my chest here… and I’m sure a kitty-kiss nose bump was incoming. 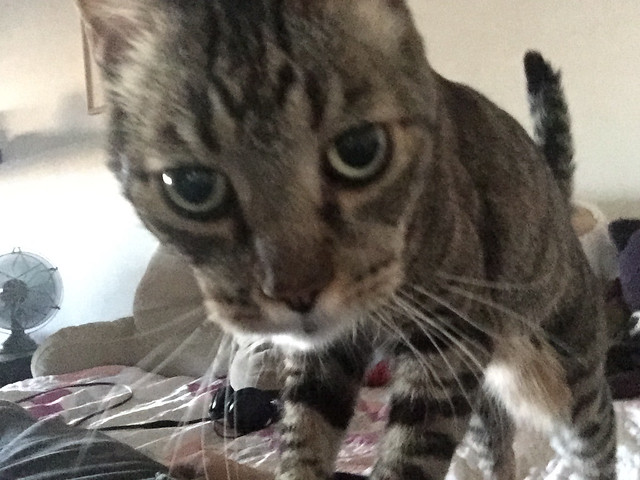 he also did this weird thing where he’d lick your head. it was really odd. and that rough cat tongue on your hair & scalp was an interesting feeling. sometimes he’d lick your arm too. I’m sure there’s some sort of animal behavior explanation, but I’m fine with just chalking it up to his unique personality.

Johnny was a really great cat. and was affectionate, loving, and always seemed to show up after a long hard day of work. there’s nothing quite like the snuggles of an animal friend to help you forget about your trouble. I hope that one day I can know another cat that is as sweet as him.

thanks for the memories, Johnny. love you. 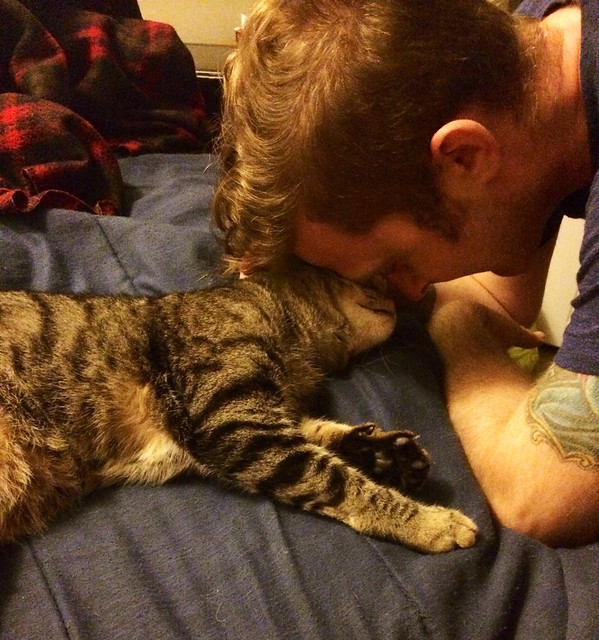 p.s. some more photos can be seen on my Flickr.