a few weeks ago, my Grandpa passed away. most of the time I use this blog to write about fun stuff, travel, creative projects, fun videos I’ve seen – but I’d to share a little bit about my relationship with him.

I was lucky enough to grow up about 10 miles away from my Grandparents. they were a big part of my life as a child, and continue to be so now. there’s more than I could possibly write about the time we spent together, but in the most simple and direct way – I wouldn’t be who I am without them.

when my Grandma asked if I would be willing to do the eulogy I was both honored and terrified. but most of all, I didn’t want to let her down. writing it was one of the hardest and most rewarding projects I’ve ever undertook.

hopefully this gives you a small glimpse into my Grandpa’s life, and shows you what he meant to me. 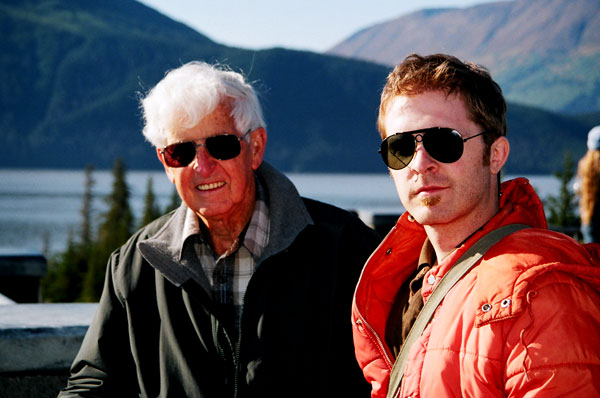 Lawrence Fitzwater was many things to many different people. Some knew him as a patriot, outdoorsman, carpenter, prankster or foreman. To others he was a friend, mentor, brother, husband, father, or Pop-pop. Today I’m going to tell you about how I knew him – as my Grandpa.

My Grandpa was a patriot, he had a deep love and strong respect for our nation and this was something he worked to instill in me. When we went to Mariner’s games at the Kingdome, he showed me that when the National Anthem is played, you stood up, took off your hat, and put your hand over your heart. At home, he and my Grandma always flew an American flag on their deck. It’s hard for me to imagine their view without the Star & Stripes as part of it.

My Grandpa didn’t think America was perfect, but he did believe it was worth fighting for. He put this belief into practice in 1943 when he volunteered for the Navy. It wasn’t long before he was in the South Pacific, working as a diesel motor machinist on an ocean-going tug.

I always knew that his experiences in the war weren’t pleasant and I never wanted to pry – but there were a few stories that have stuck in my head.

There were funny moments like when he broke a prized bottle of raisin hooch before he got to enjoy any.  And there were terrifying moments like when kamikaze pilots attacked the ships they were towing. Or when they were caught in one of the biggest typhoons in recorded history.

Imagine being in the middle of the ocean, in a storm, and having to face eighty foot waves. That’s a wave that’s about twice as tall as this room.

Those are the sort of moments that could break a man… but my Grandpa rose above them. He survived these trials and they made him stronger.

There was one lasting scar from the war, something even as a young boy I noticed — My Grandpa hated peanut butter. Now, as a kid, peanut butter is one of the best things ever. So an adult not liking it was dumbfounding. But the story makes sense. On one trip across the Pacific, Grandpa was stuck with a CO that didn’t feed his men enough. But the guys found a way of supplementing their diets with giant tubs of peanut butter. He ate enough on that trip to never want it again.

After the war, he went back to the shipyard. With a career that lasted over 30 years, he rose to the rank of general foreman. He was busy outside of the yard as well. During that time he built three homes for his family. How you work full time as a carpenter during the day, then come home at night and build houses I’ll never know – but my Grandpa did it.

After retirement he built his forth home – the one in Seabeck. It’s there that I had one of my first jobs ever. picking up nails at a penny a pop.

I’ve always been impressed by my Grandfather’s work ethic. I’ve met very few people that worked as hard, cared as deeply, or put as much attention to detail as he did. He valued hard work and believed you should be rewarded for it.

There was a day when he taught me just that. It was summer break and my sister and I were at the Grandparents’ house for the day. They’d come up with some jobs for us to do so we could earn a little spending money. Teal was inside helping Grandma, I was working outside. It was a beautiful warm day. There was a soft salty breeze blowing off the canal and I decided it would be a good time for a nice long break.

Well, at the end of the day when Grandma paid me it wasn’t the full amount. She told me that Grandpa had seen me slacking off and since I didn’t work the whole time – I wasn’t getting paid the whole amount. That’s a pretty strong lesson for a eleven year old. I wanted the money, but more importantly I didn’t want to let my Grandpa down.

My Grandpa was a great teacher, not only in life lessons – but also with practical skills.

Several years ago, my father, Larry, his brother, Nick, Grandpa and I all travelled to Sheepranch, California to work on an old family home.

Now, when you are as skilled at something as Grandpa was at carpentry, sometimes it’s easier to do a task yourself than to train a novice.

On that trip, I was the novice. But my Grandpa didn’t just give me busy-work, he gave me a task that was just above my abilities. Then, he guided and instructed me through its completion. The time we spent there is one of my fondest memories and the work we did gave me the confidence to take on projects of my own.

I always knew that if I got stuck or had a question he would help me. And it wasn’t just me. Over the years he spent an untold number of hours working with his daughters on home improvements, he helped neighbors with remodels, and he volunteered with the community and church.

My Grandpa was a gracious, kind, and an extremely knowledgable teacher ready to share his gifts with those in need.

I think part of why my Grandpa was so generous is because he grew up with so little.

He was born on a farm, less than a mile from here. When he was only 12, his father died and he had to help support his mother, two sisters, and brother Floyd. He chopped wood, mowed lawns, and travelled door to door selling sacks of fresh corn and tins of strawberries.

After his older brothers left home, he became the man of the house and at age 16, after his sophomore year of school, he went to PSNS to work on ships damaged in the attack on Pearl Harbor. He earned 20 dollars a week, and after giving his wages to his mother, kept just 50 cents for himself. Even as a teenager, Grandpa put his family first.

After the war, my Grandpa started to court my Grandma. They married in 1949 and together raised three daughters – Lori, Shirlene, and my mother Gwen.

I’ve heard my aunts and mother recall fondly summer camping trips the family took. With a small trailer they pulled behind their car they went all over the Northwest.

But while I’ve heard stories of those adventures and seen the pictures – I didn’t experience them.

What I did experience was my Grandpa’s ability to be present in the lives of his family… and I don’t mean just to attend our events. No, Grandpa was always really there in the moment – supporting, loving, and encouraging. Whether it was my soccer game on a cold rainy Saturday, the blistering heat of my Sister’s graduation, or the practically perfect day that Mackenzie and Ernie got married, Grandpa was there.

It’s hard to remember a recital, little league game or birthday party he wasn’t at. And always he had a smile, a hug, and a word of encouragement for you. I knew I could always count on my Grandpa’s love and support.

I’m sure each of you has a memory of a time he went out of his way for you. For me, one that stands out was when I was living Sonora, California. It was my first year away at college and I was pretty lonely. It wasn’t easy being so far away from the family who’d been so close for 18 years. But that spring, on their way back from the Southwest, my Grandparents drove out of their way to come and visit. They took truck and trailer up the winding mountain roads and spent the weekend with me. That visit, brief as it was, helped give me the strength to finish out the year.

Even when he couldn’t be physically present, Grandpa was involved in our lives. Like when Teal was at MIT, he made sure that she had a tool kit for her dorm room. He saw a family member in need and he helped them.

He was very attentive to the lives of his loved ones and had a knack for remembering what you were doing. And we all know, If there was a tool you needed for a job… it was a good bet you’d find it under the tree that Christmas.

Even if he didn’t always understand exactly what sort weird project I was working on, I always knew Grandpa was proud of me. And he was proud of our entire family. Anyone who would listen was sure to get an earful about his kids, grandkids, or great-granddaughter, Brielle. He told me numerous times how lucky he was to have us, but the truth is, we were lucky to have him.

I want to leave you with a final saying. It’s a traditional goodbye that my Grandpa learned in Kwajalein and one that I know he’d appreciate us all saying together.

I love you, Grandpa.

in addition to the eulogy, I also helped my Grandma make two videos. she picked out all the photos… and the music… and order. so basically all I did was follow instructions =)

his obituary can be found here.