One Does Not Simply Edit A Poetry Book

10 Dec One Does Not Simply Edit A Poetry Book

Posted at 20:39h in behind-the-scenes, writing by Luke 0 Comments
0 Likes

hope the holiday season is treating you all well so far. mine has been pretty full of parades, turkey, and football watching. looking forward to getting up to the mountains soon. there has not been nearly enough shredding in my life.

anyhoo, enough with the small chat. today is the second part in the blog about the poetry book “The First Year”, that I edit for my friend and mentor, Cece. in the last post I talked about my job working in the DAI department’s office at SFSU and how she and I met. you can read it here.

so imagine you’re me. you’ve just gotten 170 poems to edit into a collection and you’ve never edited poetry, or a book, or a book of poetry before. what do you do? well, I don’t know what the hypothetical you would do, but the real me started with organization. that might be the film editor part of my brain at work, or maybe my German heritage. heh.

my first step was to make the file names match the names of the poems. if there were two poems in one file I split them into separate documents. as I did this, I begin to notice that there were duplicates. these got “versioned” based on the date created. for example, I had “Ordinary Thoughts.doc”, “Ordinary Thoughts 2.doc”, and “Ordinary Thoughts 3.doc” I didn’t make any decisions about which version to use, I merely organized them.

next I combined all the poems into one document, a poem per page, and printed it out. I really like reading actual paper. there’s something great about being able to write a note on it, cross a word out, or change the order of pages. plus – I spend a LOT of time looking at screens, so it’s nice to have a project that doesn’t involve one. 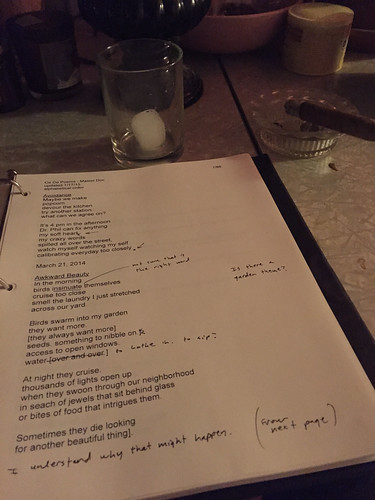 with the poems in hand, I poured myself a glass of whiskey, lit a cigar, and began to go through them. right away I saw little tweaks that I wanted to make, ways I could change things to improve and smooth out the form. after about 45 minutes I gotten through 3 poems. I realized that this was not the right technique. just like with editing a film, I needed to start macro and then work to micro. it’s important to have an overall concept for a project before attending to the details. imagine building a house – you don’t paint the molding in the bathroom before you put the roof on the living room.

I put my pen down and just read.

experiencing Cece’s poems for the first time was pretty emotional. it hurt seeing someone I cared about struggling with the disease. I could hardly imagine what she and her family were going through. and at the same time, I felt incredibly honored that she’d trust me with the project.

over the next few days, while I worked on editing THE LAND BEFORE TIME I thought more about the project and frankly it was a little overwhelming. where should I start? I remembered the old saying “when in doubt, sort it out.” haha, okay I just made that up… but I did realize that more organization was necessary to understand what I was dealing with. I came up with four categories: memory, illness, family, and hope/humor/misc. each of these got their own different color post-it note. I’ve found color coding is a great way to visualize themes in my screenplays so maybe it would help here! 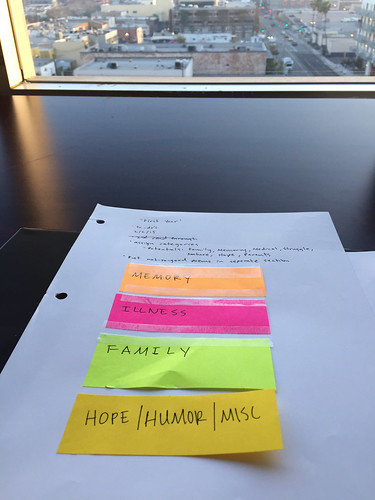 with the post-its in hand, I assigned each poem a color. if one landed between two categories it would get marked with both. during this process I also began to eliminate duplicate poems, prose, and ones I just didn’t like. I hoped that like with “Found In Kitsap”, if I was familiar enough with the pieces that an idea for the form would present itself to me.

I really didn’t know what I was doing… but I knew just enough to keep going. 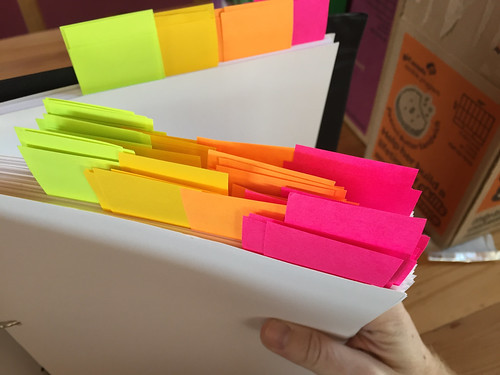 the next step was to reorder the poems by category. trying to keep track of 100+ individual pieces was too hard for my brain. but thinking about 25-ish was a much more manageable task. after doing this I found some poems that were basically the same – but had been titled differently so I hadn’t found before. I was also able to eliminate some based on content. if there was two that dealt with the same subject, I simply picked my favorite and removed the other.

I decided to give myself a break and work on other projects for a bit and put this into “background rendering”. that’s where I let my subconscious work on a project while I do other stuff. in downtime it’ll pop in and I can think about it, but it doesn’t occupy the main part of my brain. at least, that is what I tell myself.

after a week or so I had a general idea for the order of the book. 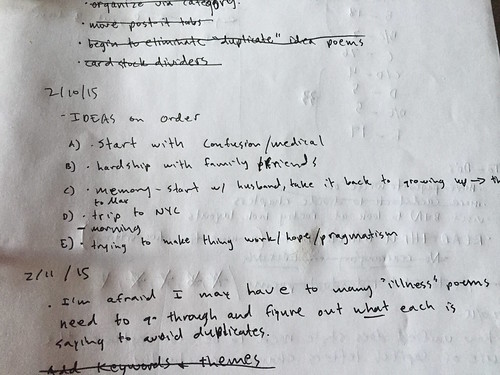 it was important for me to take the reader on a journey that represented Cece’s experience, while at the same time not leave them emotionally crushed. Alzheimer’s is a horrible disease, but even in the midst of the pain and heartache, Cece’s writing contained elements of hope, joyfulness, thanksgiving, and pragmatism. these were the emotions I hoped the reader would leave the book with.

just like with the colors, I went through and assigned letters to each poem. if one seemed like it could be a transition poem it would get a slash, like “B/C”. once they were all labeled I reorganized again. so instead of 4 categories I now had 9. remember what I said earlier about working macro-to-micro?

I needed to get an overall feel of the collection. did my order work? I read through the collection. just read. no notes. no editing. was the order I’d come up with working to take me on a journey? I was pretty anxious. if this didn’t work, I’d have to go back to the drawing board.

it did work. there were some tweaks and rearranging that was needed, but for the most part the concept was tracking! I was stoked.

now that I had all the walls of my book-house up, the electrical laid, and the plumbing in place – I could finally start finishing of the rooms. which is to say, I could start editing the actual poems.

editing poetry is a tricky thing, because by its very nature – poetry doesn’t have a lot of words to work with. and the words are there are usually pretty important. beyond the meaning & symbolism of a particular word choice, they also affect the rhythm and the rhyme. so even the smallest of changes can have a big effect. and like I said earlier, I don’t have a tremendous amount of experience with poetry…

so I tried to limit edits to the following:

Format – make it similar.
• did each line start with a capital? was there punctuation?
• each poem could have its own style, but it needed to be consistent to itself.

Tense – make it match.
• sometimes it would work to have a tense change on the final line, but for the most part it was important it be uniform.

Stanzas & lines – give them rhythm.
• where did I need to break the poetry to give it a cadence and flow?
• reading it out-loud helped determine this.

occasionally, I’d change words to simplify, or to help execute one of the above. but I was wary of making too many “creative” changes. these were Cece’s poems and I wanted to make sure that her original intention carried through.

a couple more rounds of editing and I felt the collection was ready to share with Cece. again, I was nervous. would she like it? would the changes I made work for her? had I overstepped my bounds? a week went by… then she sent me this..

“I am so glad to see the poems. I think the arc you created is very valuable. And the close is perfect.”

after she’d had a chance to review we got on the phone and went through the poems, one by one. sometimes she knew what she wanted to change, sometimes she wasn’t sure and I’d give her suggestions. other poems she just eliminated.

once the poems were “locked” it was time to work on the design of the book. I went to the local Barnes & Noble and looked through poetry books to get ideas for style and typography. I made a few versions and sent to Cece. after some notes we had a style she was happy with. then while I worked on doing the book build in Adobe InDesign, she worked with another former student, Andy Wong, to design the cover.

finally we had all the pieces complete… I uploaded to Blurb and a couple weeks later had a physical copy in my hands. 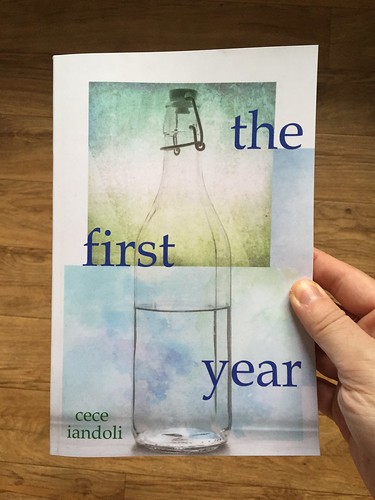 I was pretty happy with the first mockup of the book, except for the poems on the right side. when I did the layout I forgot about the FOLD of the page. there’s a certain amount of real estate that you lose when making a physical book because of how the page rolls over. a more experienced bookmaker would probably know this… but a novice like me needed to see it firsthand. it was an easy fix… and just like that, we were was done.

overall “The First Year” was an interesting and challenging project. it wasn’t something I ever expected I’d do and who knows if I’ll edit another person’s poetry again… I’m thankful for the experience of doing something new and even more so – for the opportunity to help Cece. in the grand scheme of her illness, the book is a small thing, but it is something. I hope that having the book will provide some comfort and joy for her and her family – and maybe others who are struggling with the disease. for me this was a good reminder that while we might not be able to solve every problem, if we look hard enough – there’s usually something we can do that helps.

thanks for being part of this journey.