today is pretty exciting because it represents a filmmaking first for me. I’ve just released my first animated short! in the ol’ day job, I’ve worked quite a bit doing animation editing, but my new film HAWKWARD is my first foray in writing, directing, and producing animation.

before I give you the behind the scenes details, you should watch it. it’s only 30 seconds long!

the basic idea for this has been bouncing around in my head for quite some time. 3 birds on a wire. a hawk eats one. then they have an awkward moment. with the pun of course=) I always saw it as a t-shirt or a comic strip. the thought to make it a film hadn’t even entered my mind. but one day while working on LBTXIV I would be inspired to make it an animated short.

I was working on the animatic for THE LAND BEFORE TIME and was struck by how evocative and full of character the work of Robert Sledge and Ken Boyer was. even though the boards were just rough pencil sketches, they had been able to give the dinosaurs a tremendous amount of life and energy. this made me pause… if they could do this with dinosaurs, could they also do it with birds? I had a hunch that they could…

next time I took a break I walked downstairs to their room and pitched them the idea of this super short animated project. I asked if they would be interested in working on it with me. they liked the idea and agreed that the scope was achievable. as anyone who reads my blog knows, picking projects that I have the ability to complete is a reoccurring theme.

there were a few things that I needed to do before they could start. first, I needed to write the script. second, I needed to do image research. the script didn’t take long; after all, I envisioned the film to be under 30 seconds. the research had the potential to take a lot longer. but luckily, I had a great birding book that my folks had given me.

I got a cup of coffee and began to pour through the book. when I saw a bird that was similar to what I had imagined, I marked it with a post-it note. research is one of the most fun parts of the process. it’s like a treasure hunt between your imagination and reality. sometimes it can be easy to get bogged down or procrastinate in this process, especially while writing, and it’s important to remember the end goal is the finished product – not the research. in this case I was limited to just the one book, so it didn’t take too long. 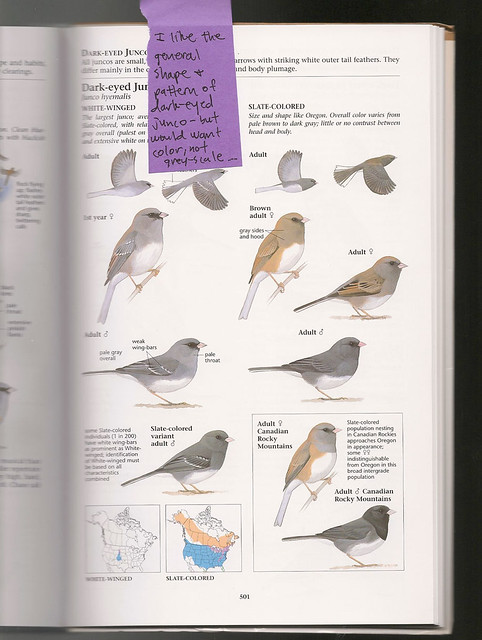 I scanned the pages and emailed them to Robert. later we chatted a bit about them, then he worked on the character designs. it wasn’t too long before he came back with some different options for our birds. I picked my favorites and he had what he needed to start the storyboards. 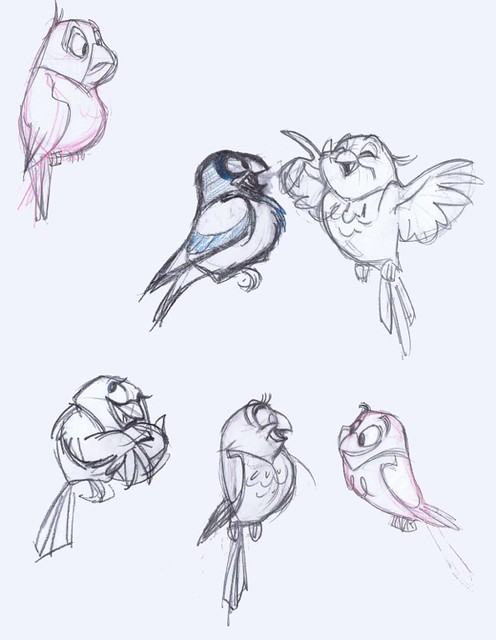 around this time, Teal got back to me about the script. basically she said “you can do better.” at first I grumbled, because that’s the normal thing to do. but once I thought about it I realized she was right. in my first draft the hawk just “shows up” because… well… reasons? it was an unmotivated plot action. the story was “the birds sit on the wire talking AND THEN a hawk comes and eats one of them.” it wasn’t a “but” or a “therefore” it was an “and then”. which is, to put it simply, lazy and bad writing. (more on this idea in an amazing video from Trey and Matt of South Park.)

so I began to brainstorm solutions to the problem. it was during this process that I figured out the whistle gag. now the story was “Gary blows the raptor whistle THEREFORE a hawk eats his friend.” in addition to motivating the plot, the punch line now made more sense, because he was at least partially responsible for what happened to his friend. it also gives an opportunity for an “ah-ha” moment for both the characters and the audience to experience. I think these reveals and moments of realization are some of the most satisfying parts of storytelling – and I was stoked that HAWKWARD now had one.

this is a good reminder how important tough critical feedback is to the artistic process. you NEED people to tell you when something isn’t up to snuff and at the same time to encourage you to do better. so thank you, Teal =)

now that I had a good script, I reached out to my buddy Nick Shakoour. I’ve worked with him several times before doing voice work on the PORTLAND MUSTACHE COMP spot and SKYDANCERS. he liked the script and was down to give it a go. so we scheduled a time to do a phone call recording session. since we’ve got some familiarity working together it was less important that we be in the same place… and since our schedules were both reasonably busy – working remotely enabled us to expedite the process.

it was a LOT of fun working with him to create the character of Gary. even though he was a little bird I wanted him to have a bunch of attitude, like a cute version of The Fonz. with that direction, we began. Nick would try a voice, I’d give him a note, he’d tweak it, and we’d repeat. after a few versions we were pretty close so he started recording. a few takes later we were done. all told it took us about 40 minutes.

here’s an outtake of a line I thought up while we were recording… but didn’t end up using.

Nick sent me over the audio and I edited it into a final “radio play” for the piece. I emailed this to Robert and Ken so they could have as reference for their work.

next week, I’ll continue with the process – beginning with the storyboards and continuing through the animatic, background painting, color animation, and sound.

let me know if there are any areas you are interested in and I can included them!

p.s. Nick is a talented actor ON camera as well. check out more of his work here.