Posted at 01:39h in behind-the-scenes, process by Luke 0 Comments
0 Likes

a quick refresher of last week’s blog. while working on LBTXIV, I had the wild idea to take a silly joke and make it into an animated short. I wrote a script, found artists, recorded the dialog and got project in motion. my storyboard artist/character designer, Robert was busy working on the boards.

a few weeks later, Robert turned in the storyboards. they were pretty great. his character work is so expressive and it made me chuckle seeing the birds acting out the script. after a few small notes, I was ready to start work on the animatic.

here’s a rough, pre-boards sketch he did as we worked out the staging. 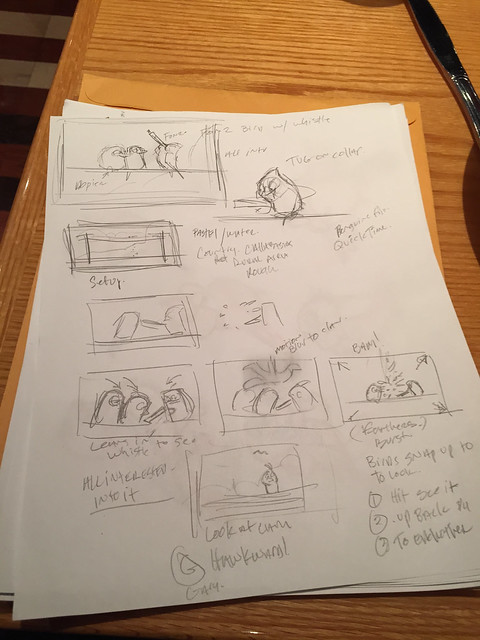 as began to edit, I realized there was one pose that I needed for the end. Robert was busy working full time on a gig, so I wasn’t sure when I could get the drawing done. luckily the director of LBT, Davis Doi, was around. he knew exactly what was needed and about thirty minutes later he brought me this. 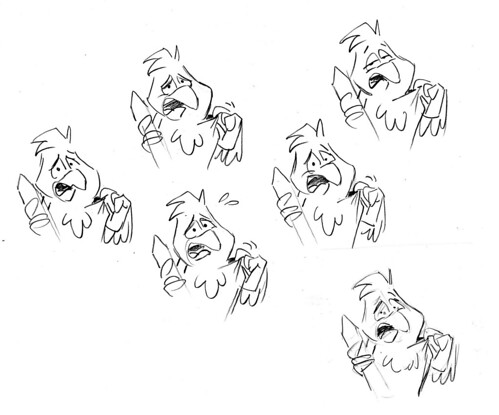 with the animatic done the project was ready to move on to animation. unfortunately, Ken was too busy to work on the project, so I started searching for another animator. when I was meeting with PIKE FX to talk about the monster shots for TIME TO EAT, I told Ben about the project, he thought it sounded interesting so we watched the animatic. it made him laugh, which was a good sign. he said he’d talk with Harry about it and get back to me. a couple days he sent a quote for the animation. it was within my budget, so I gave him the go ahead to begin.

the last art step was the backgrounds. I knew that I wanted them to have a classic, hand painted style – but I’d never done this part of the process. once again, I was inspired by the talent of the people working with me on LBTXIV. in this case, I turned to our art director Sean Platter. since I wasn’t in a huge rush, he agreed to work on HAWKWARD in between his regular gigs. so once again, it was time for me to search for reference images.

here’s one that we both liked a lot. the color palette isn’t right, but the level of detail and the style of painting are pretty close to what we wanted.

he sent me back a couple of other references and we were able to further define the style before any drawings were done. it’s very, very important that everyone is on the same page before work is started. this can save a lot of headache down the road. and just like planning for production, or organizing for post – the time you spend upfront will pay dividends later.

while the backgrounds were been worked on, Ben sent over the rough animation. it was so awesome to see the characters come to life! they were cute and funny and it made me laugh. I was pretty dang stoked. I had some notes on the timing of the acting, particularly the eyelines. that is, when & where the characters were looking. that is a small piece of the overall animation, but very important for the comedy. we can “say” a lot with just a look and by having characters “notice” certain things it clues the audience in that they too should notice them. in the next pass Ben was able to address those and we were good to move on to ink & paint.

during this time the background layout was completed and Sean had moved on to the background painting. here’s the layout and first round of the painting. I really like the stylized clouds, but for this project they were a little too stylized. you’ll notice the final version has softer, more simple clouds.

the final backgrounds were sent to Ben and he was able to finish the animation. now the final steps – composing with McKenzie (who did the PITCH ROOM), sound design and mixing with Steve (who does all my stuff), and titles with Ollie (who did the TIME TO EAT poster & titles).

and that’s it! it was a fun and challenging experience to make an animated short. I was really blessed to have a job like editing LBTXIV because in addition to meet talented artists like Robert, Ken, and Sean – it also gave me the opportunity to learn about the different parts of the animation process. additionally, having the support of the director Davis, and the producers, Lisa and Deirdre helped a great deal. it was encouraging to know that when I had problems or questions I had a whole team of people whose experience and expertise I could draw upon for help.

now that I’ve spread my wings (yuck yuck) I’m starting to get excited about the possibilities animation holds. there is such an incredible variety of stories and styles that can be realized through the medium. it’s an area I’m looking forward to exploring.

thanks for reading and please let me know if there are any parts of animation process you’d like to know more about… I’ll do my best to answer!

p.s. and in case you didn’t see it – here is the animation!