origins of The First Year

03 Dec origins of The First Year

or afternoon? or nighttime friends? I guess with my international readership it could be all three. (haha) but who’s got time for that kind of question? okay I’ll stop. this is what happens when I start writing before I finish my first cup of coffee.

anyhoo – today is the first in a short series about a project I finished a couple of months ago. it’s been a rather… “eventful” time in my life, so I haven’t been able to tell you about it until now. the project is a collection of poetry titled “The First Year”. (you may have seen #FirstYear on twitter as I worked on it). it was written by Cece Iandoli and edited by me.

now you may say, “Luke – what do you know about editing poetry? or poetry at all?” and you’d be right to ask. working on this was a new and daunting task. but while my poetry knowledge is lacking – I’ve spent a reasonable amount of time editing. consistency of form, rhythm, brevity – this are all things that I practice in my “day job” as well as my own writing. I hoped that that experience, along the experience of “Found in Kitsap”, where I placed 100 random photos into a collection would would translate into creating a compelling collection of poetry.

but I think I’m getting ahead of myself.

who the heck is Cece? and why was she asking me to help with her poetry book?

in order to answer that I’m going to take you back to my days as a college student at San Francisco State University. part of my financial aid package was “work study.” this didn’t mean I got paid to study, rather it meant I could work a low-level job at the University. but first I had to find a someone to hire me. I had a friend who worked in the departmental office for the Design and Industry department (DAI). he said it was a great job and since it was in the same building as the cinema department – I’d always be close to my classes. I applied… and I got it.

the job was somewhere between “office assistant” and “secretary.” I’d work 12-20 hours a week, answering phones, responding to emails, making copies for professors, and filing papers. I’d also keep track of appointments for the department chair during her open office hours. overall, my main responsibility was to be a friendly face to our students. to help them or point them to the place they could be helped. that doesn’t sound like a tough job, does it? well, if you’ve ever had to deal with anyone at a university, they probably gave you the impression it was the hardest job ever.

bureaucracies are odd things. they often have suffer from a strange, self-propagating entropy.

arg, I have to step back AGAIN and explain a bit about my job history. my first “real” job was at a Safeway grocery store (don’t worry I’ll write about this at some point). this chain of supermarkets decided to implement a program called “superior service”. whatever the interaction with a customer, you had to go one step above – you had to provide superior service. if they asked “where are the capers?” you’d take them there. after bagging their groceries, you’d OFFER to take them out – you didn’t ask if they “need help.” as an employee you did this because you didn’t want to be fired… and if the store did well enough you’d have a chance for financial rewards.

well, no such program existed at San Francisco State. any interaction with the university was like going to the DMV. people were unhelpful at best. often they were misinformed and gave bad information. occasionally they were downright rude. it was exasperating trying to get an answer to any question, or to do anything outside the prescribed order of academic function.

nowhere was this more apparent than my own department – Cinema. I cannot remember ONE positive experience dealing with the department or any of its staff. and I wasn’t the only one. my classmates all experienced the frustration of a department who’s service to the students seemed to be their last priority. imagine showing up at 12:01pm and needed to turn in a paper, but finding the door locked. you can hear people inside the small office. you knock, you speak through the door, you beg to just be able to drop off your form, and you get no response.

when I started at the Design and Industry office, I vowed to be different. I promised myself I would never just tell a student “I don’t know” or makeup an answer. if I didn’t know – I’d ask other people until I did. I would be friendly. I would smile. I would give them the service that I wanted to get. in fact all the work study students in our office did this and it wasn’t just because of me – it was because of the example put forward by our office manager and our department chair. more often than not, during the lunch hour the office manager, Rosa would keep the office door open. sure, we were supposed to be closed – but she wanted us to be available to students, “just in case.” 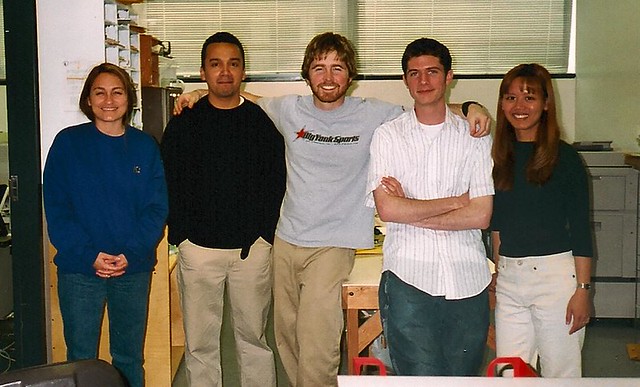 our department chair was no different. she was almost TOO available for students. if a student happened to catch her outside her office and ask her a question, she would invite them in and help them. she needed to be doing her own work, but she had such compassion and such a big heart for her students that she’d go out of her way at a moment’s notice. I acted like her guard dog, making people sign up for actual office hours when I could. I wasn’t telling students “no”, I was just telling them “later.” if every student got to see her whenever they wanted, she wouldn’t have been able to run the department.

she was also kind and supportive of me, both as student and artist. even though I was in a different department, she would always take a moment to ask me about my studies. when I decided to go live at the Kirkwood Ski Area, she let me take two independent study classes from her so I could make a weird video installation. when I decided to apply for the Interdisciplinary Digital Art program, she was right there, cheering me on and helping me engage in the process. she understood the bureaucracy of the school and gave me the tips to navigate it. she was one of the most encouraging and supportive people I’d ever met. and probably more than any instructor in the cinema department – she was my college mentor.

the name of this wonderful woman? Cece Iandoli.

after I graduated college, we gradually lost touch. I’d email every so often and most of the time wouldn’t hear back. then I sent her a sample of “Found in Kitsap.” she emailed me back and said that she had a project she wanted to talk about and wondered if we could chat on the phone. I said I’d love to.

when we talked I learned why we’d fallen out of touch… she had been diagnosed with early onset Alzheimer’s disease. I didn’t know what to say… (and I still don’t know now other than that it’s a horrible, awful, and brutal disease.) since her diagnosis she’d been writing poetry – about the disease, the experience, the fear, the small joys she found, and the memories of her life. she wasn’t sure if the poems were any good and wasn’t sure what to do with them.

she asked for my help… the prospect of the project scared me, both in a creative and emotional way. it had the chance to be a dark road… but I knew that this person who meant so much to me was hurting and this was a way I could show my love for them. so I said yes.

a week or so later I got an email with over 170 poems attached… now I just had to figure out what to do next.

p.s. here’s a little treat for you… a short I made during a slow day at work.