the Flag and the Moon

15 Jun the Flag and the Moon

today I wanted to share a quick story about photography.

a couple weeks ago my sister was in town visiting. we did all sorts of fun stuff, travelled all around the city, ate lots of tasty food, etc. one afternoon when walking home we looked up and saw the full Moon perfectly aligned with the top of the Capitol Records building. it was a beautiful, blue-skied spring afternoon with just enough wind to make the American flag unfurl. in other words, a perfect photo opportunity. I took a shot on my iPhone… but it wasn’t that great. this needed a telephoto lens.

since we were only a couple blocks from home, I went and grabbed my Canon AE-1. now, normally I use my 50mm lens… and occasionally I use the 85mm one for portraits, but I have have a 70-210 telephoto. it’s a heavy lens, bulky, and requires a lot of light, so I rarely take it out. however, this was the perfect time to use it.

I headed back down and took a photo. and I do mean “A” photo. there was only one frame left on the roll. sometimes the last frame will only end up being a 1/2 frame. or will have a bad flare, or some other damage. it’s always a tossup if that last image is going to turn out and I really wanted to get a picture of this.

so I ran back home and changed the roll of film. by the time I got back to the street, the moon was still in a good position. I snapped off several more photos, confident I’d gotten a good shot. for the rest of Teal’s trip I shot the remainder of the film. we went to Malibu, we went to Universal City… somewhere along the line I passed 36 exposures… then I got to 38. my heart dropped.

this had happened once before… and it’d turned out I hadn’t properly wound the film. NONE of that other roll had been taken. I put the camera into my changing bag (a light proof nylon sack with sleeves) to check. and my fear was confirmed. all those photos I’d thought I’d taken… well, I hadn’t taken any of them. in my haste to get back to the shot, I hadn’t properly loaded the film.

this really, really bummed me out.

part of the mystery and joy of film is that you never know how exactly the film will turn out. but you always hope for SOME sort of picture. now I had none. the cute photos I’d taken of Teal and Xavier at Universal, the fun wildflowers in Malibu, the shots of the moon… all gone.

but maybe, just maybe there was that last photo. that one on the roll. maybe that one came out.

I sent the film off to the lab and waited.

while I waited I thought about why I was upset. was I mad at my technical blunder? was I disappointed about not being able to share that moment with my friends? was I afraid that the moment, which seemed so vivid and important, would slowly fade from my memories?

probably all of those things are true. but I had to let it go. there was nothing I could do to get those photos back. those moments were gone. all I could do was try to do better moving forward. to check and make sure that I’d loaded the film correctly. I realized that if I did have it loaded correctly, when advancing the film with lever on right, the “film rewind” on the left would turn. I probably should have already known this… but hey, I’m still figuring out this film photography thing.

then, a couple of days ago the film arrived. I was headed out to meet some friends for a beer, but I couldn’t wait. I had to know. I ripped open the envelope and looked at the proof sheets…

and there it was.

the Flag and the Moon. the one chance had worked.

I was flooded with relief, happy that the moment had been saved. I’m not sure that I’ve gotten to the bottom of why the incident affected me so strongly. there’s definitely more there to examine. but for now, I leave you with the photo. 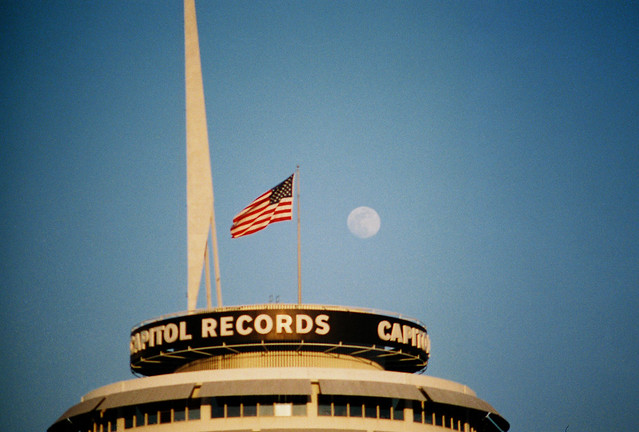