Posted at 19:47h in behind-the-scenes by Luke 0 Comments
0 Likes

right before Halloween I released my last short film, TIME TO EAT. (you can watch it here.) today I’m going to give you a few insights into its creation. about a year and a half ago I decided it was time for me to make another short film. I wasn’t sure exactly what sort of film I wanted to make, but I knew I wanted to push my boundaries as a filmmaker.

I’m fascinated by unlikely heroes, strong dilemmas, and altered realities – so whatever story I came up with, the film needed to have those themes. additionally, in order to expand my skills it needed a strong visual effects component. since my budget wasn’t unlimited, I’d have to be crafty about how the story incorporated those. lastly, I wanted to make a short that didn’t need dialogue. my last two films, CERTIFIED and SKYDANCERS were very much dependent on the audience understanding English and I wanted this one to be free of that constraint.

with those three criteria in mind, I brainstormed a few different concepts. two ideas seemed promising so one afternoon, after a day of snowboarding, I wrote both scripts. I sent them to my good friend John Wynn to get an outside opinion and later that week we chatted on the phone. his favorite was the same as mine, TIME TO EAT. I asked if he’d be willing to help and he said simply “Let’s do it.”

when I was back in LA, John and I got together and I showed him the lookbook I’d created. a picture is really worth a thousand words and having a visual example of what you want can go a long way to communicate with your team. now that we were on the same page for the style and visual look in mind, we beng to dig deeper into what it would take to make this film a reality. there were two main stumbling blocks. first, we needed a house with a basement, a rare thing in Los Angeles. second, we needed a tentacle puppet, an even rarer item in Los Angeles.

could we fake a basement by shooting on a sound stage? would it work to build stairs and combine with VFX to create a staircase where none existed? could the story be changed from a basement to an empty room in a one level home? there were a lot of potential solutions, each problematic in their own way. but we didn’t have to decide yet, because we didn’t have a tentacle.

if you’re making a monster movie, the monster is kind of an important element. so without it, there was no rush to decide our location question. part of the complication of this was that I wanted the tentacle to be a practical effect. that is to say, I didn’t want to create it entirely in a computer. the initial drafts of script had the tentacle interacting with the protagonist. it brushed his foot, loomed over his shoulders, and so on. because the boy was going to be acting “with” it, I wanted something physical on set. through a friend we talked to a model builder that might be able to build a tentacle puppet for us. I was pretty excited.

then we got the quote. the price for the tentacle was more than the entire budget of the film.

we were going to have to find another way to make the film. John asked around and found a friend who had shot a movie that had a similar monster. the design wasn’t exactly what I’d envisioned, but the prop already existed. I decided it was better to be flexible then to never make the film – so I told John we should go for it.

the only issue was… the tentacle was in England. then the friend got married. then he went on his honeymoon. then there was a flood at his parent’s widget factory… okay the last one was made up. but because of those other life-events it took almost six months to get our hands on the prop. this is pretty much the perfect example of the better/faster/cheaper dilemma.

of course, even if we’d gotten the prop in a week we couldn’t have shot because we STILL didn’t have a location. and it wasn’t for lack of trying. I scoured databases of film locations. I asked friends. I posted online. a few people responded, however none had a basement big enough to film in. it looked like we were going to have to fake the basement… but things changed the day I shared the script with Deirdre, the line producer of the film I was editing. she asked what the status of the project was and I told her we were stuck until we could find a location. she said, “oh you should talk to Lisa – she’s got a house with a basement.” Lisa was the creative producer on the film…

honestly, I was a little hesitant to ask my boss if I could use her home for my short film. the idea of having a film crew in your home sounds like “fun” yet rarely is. plus, I was nervous that we could break something expensive or worse, sentimental.

but, I really wanted to make this film. so after work one day, John and I went and looked at the space and what can I say… it was pretty much perfect. not only did it have a great basement, but it also had a kitchen and living room that were amazing. being able to shoot the entire film at one location would save a ton of time and money. 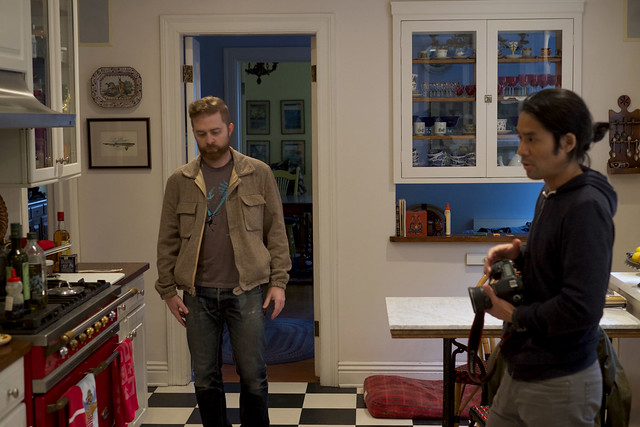 now that we had the location planning for production could begin in earnest. I’ll break down my process of preparing for the shoot in next blog – “Production”.